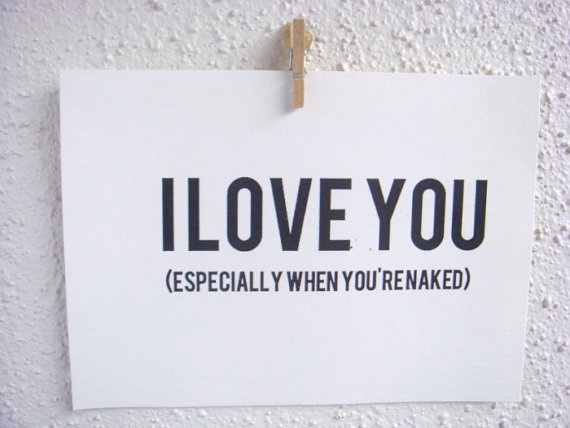 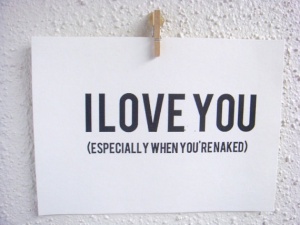 On Friday, it will be 10 official years since hubs and I dropped the first L-bombs on one another.

I’ll honestly never forget it.  We were laying in bed in my minuscule one bedroom apartment watching an episode of “Whose Line is it Anyway” on my 12″ tv/vcr combo that had come with me when I moved from college just a few months before.

Something on the tv made me laugh so hard I snorted.  And not cute dainty snort either.  We’re talking full nostril-hair-shaking-there-might-have-been-a-little-snot snort.

He looked over at me with this amazed look on his face and said, “Well fuck.”

Assuming something was wrong, or that I had inadvertently shot a snot rocket at him, I anxiously asked, “what happened?”

He replied, “yeah, I just realized that I love you.  Damn it.”

We had been playing the we’re-just-really-close-friends-who-sometimes-have-sex-but-have-no-interest-in-a-relationshp game for close to two months at that point, and I think we both had realized it was something a little more.

Kudos to him for having the balls to say it.  I sure as hell didn’t at first.

Fast forward to a little over 4 years later.  We were in Florida in my hometown for Christmas walking on a beach that I had played on as a kid.  Somehow the conversation turned to where I would want to get married, if we ever got around to it.  As it turned out, which he totally knew, if I had it my way I would get married in pretty much the exact spot we were in at the moment.

Imagine my surprise when he did the whole drop to one knee maneuver and asked me to marry him.

Well, my response was “oh fuck?  Are you fucking kidding me?  Don’t you have bad knees?  What are you doing?  Fuck.  Seriously.  What the fuck?”

And you know how I know this man is perfect for me?  His response, “Well that certainly illustrates the diversity of the word.  So is that a yes?”

Fucking right it was.

** Bonus points for anyone who gets the movie reference.** 🙂